Illustration with the theme of boxing men's and women's confrontation 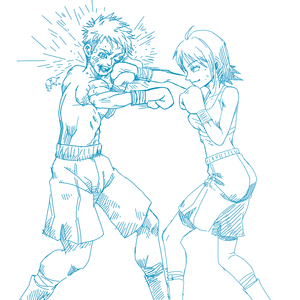 Since the content of the first project was "Request to attach a rough image", we presented a rough image like an image based on the composition of the illustration desired by the client and made an estimate. After that, there was a question and answer session with the client, and my estimate was adopted. 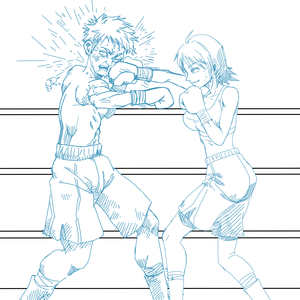 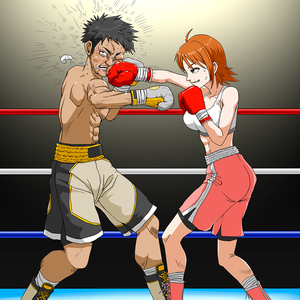 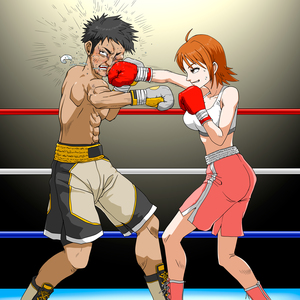 After adopting the estimate, the rough image presented first was corrected, and the rough image was corrected as shown in the attached image. After that, the corrected rough drawing was OK, so I started the work of clear copy and coloring based on it. When I presented the completed image to the client, some corrections were pointed out. After correcting that part, when I presented the image to the client again, it was OK, so it was delivered. In each case, the client showed me the corrections by marking the image I sent, so it was very easy to work with.
Evaluation
About The Creator
Very satisfied

I asked for an illustration with very unusual content, but I asked them to carefully reflect each of these requests and finish it as a wonderful illustration as I imagined. Also, the communication during the creation process was very quick and I was able to leave it to me with confidence. If I have another chance, I would like to ask you to create an illustration again.
About Skillots
Very satisfied

Each procedure is displayed in an easy-to-understand manner for each stage, so it is very easy to use and I am satisfied.
Project Detail

Copyright belongs to the artist and the Client is permitted to use the Deliverables
Use-by date:not specified
Use for:not specified

1 Purpose This is an illustration for personal viewing. 2 Outline (1) Illustration setting I imagine that a strong male boxer who is a world champion will play against a female boxer who has an outstanding style and looks good, and will be made bumpy. The concept is a gap in which a cool and strong male boxer loses to a woman with a delicate and feminine physique. (2) Illustration format Please create a color illustration. (3) Character image ① Male boxer ・ Professional boxer with a cool and strong protagonist appearance (I would like to ask you to have an image like active world champion Inoue ○ ya) ・ Very muscular body and appearance Do not make your upper body naked, boxing trunks, boxing gloves, ring shoes, the same image as in an official game, and do not look like a dog. (2) Image of a female boxer ・ Please have a beautiful face, a short bob with black hair, and a straight hair.・ The arms, legs, and waist are slender and slender, but the chest is large and the style is outstanding. ・ The appearance is boxing trunks, sports bra, boxing gloves, and ring shoes. The sports bra should be shaped so that the cleavage of the chest looks large. (3) Scenes I want you to make an illustration ・ When the male boxer and the female boxer are close to each other, the moment the male boxer tries to release the right hook, the female boxer's right hook hits the male boxer's chin to the cheek area first. However, the image that a mouthpiece entwined with a large amount of saliva has popped out from the mouth of the male boxer ・ The male boxer has a hollow expression in a groggy state. Image of a female boxer with a fearless smile * Please refer to the attached image "Character posture" for the posture of the two in the illustration. * Also, I would like you to include at least the area from the head to the ankle of two boxers in the illustration. (4) Others ・ The atmosphere of the illustration is an image of "serious boxing manga". I think of it as a serious boxing game, not as a gag style.・ As for the background, I would like you to describe it as it may be simple. It is only necessary to have the image of playing a match on the ring of the venue where the spectators are, so there is no need to describe the spectators in detail. 3 Request for attachment of rough drawing ・ We apologize for the inconvenience, but it may be simple, so when making a proposal, we would appreciate it if you could create a rough drawing and attach it. 4 Delivery file specifications File format: JPEG Size / specifications: About 15 cm x 15 cm, about 350 dpi Points: 1 point 5 Budget The budget is assumed to be within 15,000 yen. 6 Materials that can be provided: As shown in the attached reference image 7 Comments to other creators I like the illustrations of girls who are boxing, and I would like them to be created for personal viewing, so I asked for a quote. I will ask you. This is an illustration with very unusual content, but if there are any creators who can create it, I would love to hear from you.
Contact