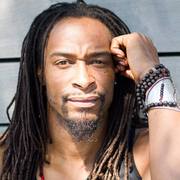 Keith WildChild Middleton, A main performer in the NY cast of Stomp for 20 years, and has traveled worldwide with the show. He does a wide verity of music styles and utilizes many instruments.

He is the star of: Pulse; A Stomp Odyssey, and has been featured in various films, television and live shows around the world. Keith has performed on live major television shows from Sesame Street to the Oscars. Commercial credits include, McDonalds, Volkswagon, Toyota and Honda. Keith was also a comedic and choreography consultant for the animated movie ROBOTS, which starred the late great Robin Williams, Ewan McGregor, Halle Berry, Mel Brooks, Greg Kinear, Drew Carey, James Earl Jones and grossed over $ 378.7million.

I have extensive background acting. I have appeared in DVDs, Live shows in New York and all over the world, TV commercials and Movies with speaking roles.

I can do any kind of English voice acting you need. I will put some footage of just my voice but for now accept my music as a sample of my voice as some of it is spoken word.